Samarkand - The Capital of Tamerlane

Samarkand is situated in the valley of the river Zerafshan. It is the second largest city of Uzbekistan and is of the same age as the city of Babylon or Rome.

The history of Samarkand is about 2,750 years old and has witnessed many upheavals during the times of Alexander the Great, the Arabic Conquest, Genghis-Khan Conquest and lastly Tamerlane's. Hence, the culture of Samarkand was developed and mixed together with the Iranian, Indian, Mongolian and a bit of the Western and Eastern cultures. Samarkand is one of the most ancient cities in the world. As other first centers of human civilization - Babylon and Memphis, Athens and Rome, Alexandria and Byzantium - Samarkand was intended to go through many events and shakes.

Majestic and beautiful city Samarkand has a marvelous and attractive power. Poets and historians of the past called it "Rome of the East, The beauty of sublunary countries, The pearl of the Eastern Muslim World". Its advantageous geographical position in the Zarafshan valley puts Samarkand to the first place among cities of Central Asia. Over the history this legendary city on the Silk Road went through growths and decays, suffered from destroying invasions of foreign rulers and again revived, becoming more beautiful. Trade routes to the west, to Persia, to the east, to China, to the south, to India, intersected here and formed intersections of the Silk Road.

Today Samarkand is the treasure of unique antiquity spirit. It is included in the UNESCO World Heritage List due to the abundance of material and spiritual values. Unique monuments of ancient architecture, heritage of scientific and arts schools, artisans workshops are well-known around the world. Registan became the central square of Samarkand in the 14th century. The word "Registan" can be translated as "a sandy place". Earlier there flowed a canal form­ing sand and silt deposits. Six str… Sher-Dor Madrasah, built between 1619 and 1636 imitates Ulugbeg's madrasah. Ribbed domes on high drums placed on opposite sides of the front portal tower over a two-story facade. Islamic inscrip­t… Gur Emir underground crypt contains graves of three more governors except for Amir Temur and Muhammad Sultan. They are Temur's sons Miranshah (1366-1408) and Shahruh (1377-1447), and his grandson Mirz… 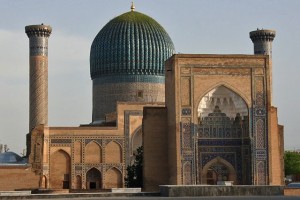 Madrasa and Mausoleum of Bibi-Khanym

The big madrasah built near the cathedral mosque stood there till the middle of the 18th century. It was named after Bibi-Kha- nym too. Originally the madrasah's portal was so large that could compete… In the middle of the 17th century the cathedral mosque of Bibi-Khanym lied in ruins and Samarkand needed a new mosque. Yalangtush-biy ordered to con­struct it on Registan. The mosque was expected … 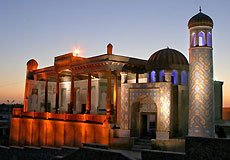 The mosque named after Hazret-Hyzr, an Islamic saint and eternal wanderer, stands on the southern slope of Afrasiab hill, on a crossroad behind the central bazaar. A legend says that Hazret-Hyzr helpe… Mausoleum of Khodja-Daniyar is situated on the northern slope of Afrasiab hill at the old wall near a curative source. According to legends, Khodja Daniyar was a companion of Kusam ibn Abbas who was c… Siab market is conveniently located, with the great mosque of Bibi-Khanim in only few minutes’ walk away. There is another landmark not far from the bazaar – Hazrat Khizir M… The rise of Shahi-Zinda necropolis on a slope of Afrasiab hill is connected with Kusam ibn Abbas, the Prophet's cousin. We know that he took part in the first Arab campaigns to Maverannahr. Accord­… Afrasiab Museum of Samarkand (Uzbek: Afrosiyob-Samarqand shahar tarixi muzeyi) is a museum located at the historical site of Afrasiyab, one of the largest archaeological sites in the wo… The basis of Kusam ibn Abbas Mausoleum consists of constructions dated the 11th century. First of all it is a small dome tomb. The ceramic stepped gravestone which was installed during Amir Temur's ti…